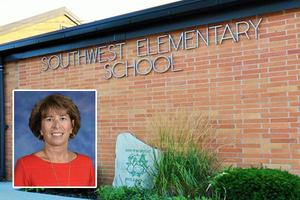 Longtime educator has served as principal of SW for 9 years, will leave at conclusion of 2019-2020 school year

Southwest School Principal Patti Bogdan will retire at the conclusion of the 2019-2020 school year, following the completion of her ninth year as an administrator in Evergreen Park School District 124.

The D124 Board of Education officially approved Bogdan’s retirement at its Nov. 19 meeting. The SW principal will retire with more than 30 years of experience in the field of education.

Bogdan – who has also served as a paraprofessional, teacher, and assistant principal throughout her career – is excited about the opportunities she will have to travel with her husband and spend more time with her family in retirement, but also describes the decision as “bittersweet” because she has greatly enjoyed her time in D124.

“I hit the jackpot when I landed at Southwest School,” she said. “It is difficult for me to find the words that express my gratitude for all the support I've received from the staff, parents, families, community, and especially the students throughout the years. Parents, thank you for sharing your children with me, I hope they have developed a positive attitude toward themselves as learners and toward school as a special place to grow and be challenged. I will treasure the relationships with so many families through the years. I will truly miss the Southwest community.”

D124 Superintendent Dr. Robert Machak said he will miss the opportunity to work with Bogdan.

“I will miss her friendship, her wisdom, and her enthusiasm for all things Southwest School,” Machak said. “I am incredibly grateful to have had the opportunity to work with Mrs. Bogdan these past eight years.”

In 2002 Bogdan earned her master’s of education and administrative certification from Governors State and soon after began her administrative career by accepting an assistant principal position in Ridgeland School District 122. After just one year there, she returned to Mokena as an AP at Mokena Intermediate School, where she worked for the next seven years before accepting the Southwest principal position in 2011.

Bogdan said she believes the experiences she had in those previous positions were invaluable in allowing her to succeed in her role at Southwest.

“I couldn’t have been doing what I do today if I wasn’t that aide in 1982,” she said. “Each position I had, I grew from there and I learned so much more.”

Of all the accomplishments and experiences over the years, Bogdan said some of her favorite memories are the times when she’s able to address the entire student body at once, oftentimes during assemblies.

“That’s a time a day I can truly make a connection with them and they see me in a friendly environment,” Bogdan said. “You’ve got 350 people in this one room, between staff and kids, and we’re all here for the same purpose: to talk about kindness, and to make good decisions and the right choices.”

Those messages that she shared with the students of Southwest School will undoubtedly last a lifetime.

The district will begin the search for Ms. Bogdan's successor in the next few weeks.